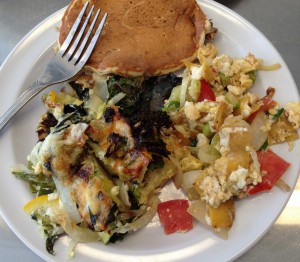 This week was the start of a new session of the SummerThyme Cooks program and with it came a new group of eager young chefs ready to try their hand at cooking.  Eleven-year-olds Landry, Olivia, and Sophia opened up very quickly as VFFC Education Coordinator Maddy Booth started with the basics of kitchen safety and using fresh produce. Booth emphasized that many fruits and vegetables are covered with chemicals called pesticides when one buys them, and they must be washed thoroughly before using them in a recipe. The girls were very knowledgeable on the subject.

“It keeps the bugs away,” added Landry.

The “Dirty Dozen” list has the information on what produce tends to have a lot of pesticides on them, while the “Clean Fifteen” list tells what produce is not so chemical-covered. Both can be found here.

Before they started the cooking, they also talked about the benefits of eating a good breakfast every day. According to Booth, kids who eat breakfast pay better attention in class, perform better on standardized tests, and feel better throughout the school day. The best breakfasts have very filling foods like eggs to get the metabolism running while keeping the stomach feeling full until lunch.

Finally, it was time to start on the egg dishes. Because of time, the group decided to focus on just two this time: strata and migas. When they began chopping, the chefs were already pretty good with the knives and only needed a few corrections like choking their hands up higher on the knife or taking it a little slower.

“It smells good in here already,” commented Sophia as they worked their way through the various vegetables in the recipe.

“Did you make sure that the bread was safe?” Booth asked Olivia with a sly grin.

Olivia was confused at first, but quickly got the hint that Booth was allowing her to eat some of the yummy-looking baguette she was working on cutting. Naturally, everyone wanted to make sure the bread was “safe” after that!

As they shredded up corn tortillas for the migas, Booth slipped in a quick lesson on fiber since corn is considered a whole grain.

“It’s a scrub-brush for your insides. It keeps everything that’s going in, coming out,” Booth explained to the giggling group.

As much as this seems like a silly statement, lessons like these are a really important part of developing children’s food literacy. Knowing the effects of what you eat on your body and what food choices benefit you, your community and the environment are very important things for people of all ages — especially kids — to learn. Moreover, the Vetri Foundation for Children strives to not only teach food literacy, but also culinary literacy by giving kids the tools to prepare those healthier choices in their own kitchens. Cooking employs fine motor skills as well as knowledge of food, measuring and even some chemistry, all in a fun and productive activity.

“I have found the hands-on, multidisciplinary aspects of culinary literacy to be truly empowering for children – their senses are fully engaged as they explore multiple literacies and put into practice crucial social skills,” said Suzanna Urminska, librarian at the Culinary Literacy Center.

Once everything was all chopped, they piled the layers of bread, vegetables and eggs in the pan to bake the strata and made sure everything was mise en pas — “put in place” in French —  for the migas by the stove. They also put together the ingredients for the banana pancakes. Everything was ready to go on the stove as the kids set the table.

The consensus once again was that the pancakes were the favored food, but they all seemed to really like the egg dishes as well.

“It’s delicious! I can’t wait for next time!” Olivia exclaimed.