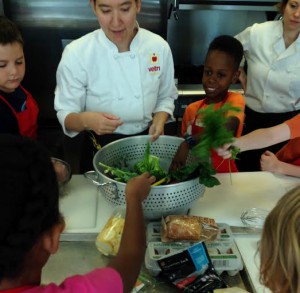 Way up on the fourth floor of the Parkway Central Free Library in Philadelphia, you’ll find a kitchen built perfectly for little chefs to whip up some tasty dishes. With eager faces, a small group of fifth and sixth graders arrived for the Vetri Foundation’s Summer Thyme Cooks, a four-week program where they learn how to prepare healthy meals with fresh ingredients while also learning basic cooking skills, like chopping, measuring and sautéing.

This week, the ten-year-old chefs-in-training, Alex, Branch, Mickayla, Maria, Jamaal, and Dwyer, prepared “breakfast for dinner,” which included eggs three ways and homemade banana pancakes. But, before they got started, VFFC chefs Sarah Cullen and Stacey Clarke went over a slew of kitchen safety rules, including the proper way to use a knife, how to pass it to a friend, and what to do if something sharp falls off the table.

“You know how it’s a reflex to catch something when you see it falling? Well, we all need to unlearn that. You never want to try to catch a knife when it’s falling,” said Cullen.

The class nodded in agreement.

Then, Cullen introduced the class to the fresh ingredients they were going to use — tomatoes, kale, rainbow chard, zucchini, broccoli, long hots and more — to make scrambled eggs, strata and a Mexican dish called migas.

Cullen emphasized that the recipes were meant only to be a foundation for the meal and that they could use any veggies that they have on hand. Cullen chose recipes specifically for their versatility, keeping in mind that many inner-city households often have difficulty acquiring fresh ingredients.

According to a study by PolicyLink and The Food Trust, low-incomeareas have 25 percent fewer supermarkets offering fresh foods. Fruits and vegetables, when available in low-income areas, are often limited or more expensive. Without access to healthy foods, the obesity rate in these areas increases greatly. The goal of Summer Thyme Cooks is to reduce that rate by showing kids that they can eat nutritious foods at a relatively low cost.

The first step was to begin chopping! At first, our young chefs were a little skeptical of the sharp knives they would have to use, but once they were handed a vegetable to cut, they dove right in. Knife skills didn’t come naturally to all of them, though.

“I messed up this one,” said Alex, worried, holding up a somewhat chopped, but squashed, tomato.

“You know what? It doesn’t matter because it’s all going in our bellies,” Cullen quickly countered, explaining that cooking does not always have to be perfect to be delicious. An important lesson for the young chefs, especially when it came to the next part.

Next, Cullen demonstrated how to carefully crack eggs. Mickayla, Maria, and Branch were unsuccessful in keeping all the shell out, so Cullen showed them a trick using one-half of the shell to attract the little pieces and take them out, since egg shells like to stick to one another. Once they were sure the bowl was free of shells, each child got a chance to whisk the eggs to make them fluffy.

Now it was time to start up the stove. The children discussed the order in which one should add ingredients to the pan, starting with the things that will take the longest, like squash and broccoli, and adding the more delicate things, like tomato and kale, later. They already knew what would happen if something was cooked too long.

“It will turn black and burn,” said Branch.

“It will take out the flavor,” Jamaal added.

They also talked about their favorite breakfast foods, with the consensus being that they like eggs but have never tried them with vegetables in them. They were all a little unsure how they would like it, but seemed excited to at least try all of the dishes.

When they moved on to the pancakes, the kids seemed to be more excited. Half of them went to work measuring the dry ingredients while the other half had fun mashing the bananas and combining the wet ingredients. After taking turns mixing the batter, they each got to pour some into the hot pan and then flip over their own pancake.

“Are we gonna eat this at the end?” Alex asked, just to be sure. By now, everyone was hungry.

Cullen reassured them that of course there would be time for the class to enjoy the fruits of their labor.

After setting the table and learning that the fork goes on the left, the kids tried the dishes. The verdict was that it was better than they had expected, and they all agreed that they had tried something new. As expected, the pancakes were a big hit!

As their parents arrived to pick them up, our young chefs were excited to share what they learned. And luckily for them, they were each sent home with a bag full of the ingredients so they could go home and recreate the recipes for their families.