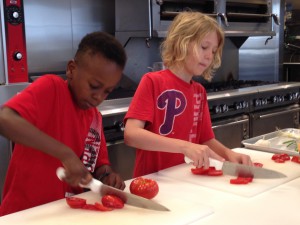 An important message that the Vetri Foundation for Children tries to teach its SummerThyme Cooks is to eat healthy and cook with fresh ingredients. The chefs learned this week that the best way to do this is to buy produce at local farmer’s markets to get fruits and vegetables that are in season and grown as close to home as possible. Most of the kids had already been to one before and happily shared what produce they had bought before.

Meghan Filoromo, Food Bucks Outreach Associate from The Food Trust, led the talk, explaining the produce grown in each season and the practices of local farmers that makes their food more sustainable. Instead of throwing out the extra parts of the plants that they don’t sell, they compost it and use the decomposed matter as soil for the next batch of crops. She also explained why you can’t find certain fruits, like bananas, at these markets.

“When they’re from somewhere else and not grown here, they’re too expensive to bring here,” she said.

Jamaal added that bringing in produce from far away also “wastes energy.”

Shopping for produce at the farmer’s market also allows shoppers to give their money directly to the farmer who’s growing the food, often at cheaper prices than you’d find at a supermarket.

Filoromo also talked about the Philly Food Bucks program through SNAP that allows participants to redeem Food Bucks coupons to purchase fresh produce at local farmer’s markets. This way, people in need of financial assistance for food have the ability to buy better ingredients.

Not coincidentally, the recipes this week featured many summer season vegetables, including tomatoes and summer squash, that can be found at local farmer’s markets. The kids began by cutting them for the Savory Summer Cobbler slated for this week’s class. The recipe also called for lemon zest, so the kids got a lesson in exactly what this means. Branch already knew and explained it to the rest of the class.

“You use the grater to scrape off the skin,” he said. Then each child got a chance to try zesting the lemon, stopping at the white peely stuff under the skin, called the “pith.”

After everything they had chopped was roasting in the oven, they prepared the topping — a biscuit-like pastry. VFFC Chef Sarah Cullen had them use the cheese grater to create smaller chunks of butter, a trick to make the pastry full of fluffy air pockets. They pulled the vegetable mix back out of the oven, topped it, and returned it to bake a little longer.

Then they moved on to the next recipe, Cornmeal Crusted Vegetables. They made a pan with whipped egg, another with flour, and one more with a concoction of cornmeal, black pepper, salt, and paprika, and set them up in an assembly line. Cullen demonstrated how to coat the green beans and broccoli by dipping it first in the flour, then in the egg and finally in the cornmeal mix. She called this process “dredging.” The kids practically piled on top of each other to get their

chance to try it — they loved getting their hands all messy as the their fingers began to cake up.  Laid out on a pan, these vegetable went in the oven too, and the kids set the table to get ready to eat.

There were mixed reactions when they finally tried the dishes.

“It tastes like tomato sauce,” said Branch about the tomato and garlic found in the cobbler.

“It’s kinda yucky,” said Alex, not really enjoying the squishy tomatoes and other vegetables in the cobbler.

Some preferred the cobbler, mostly because of the yummy biscuit topping, but others liked the crusted vegetables because it gave them a nice crunch.

“Is it as good as you expected?” asked Cullen.

“No, it’s better!” they all exclaimed as another successful class came to an end.