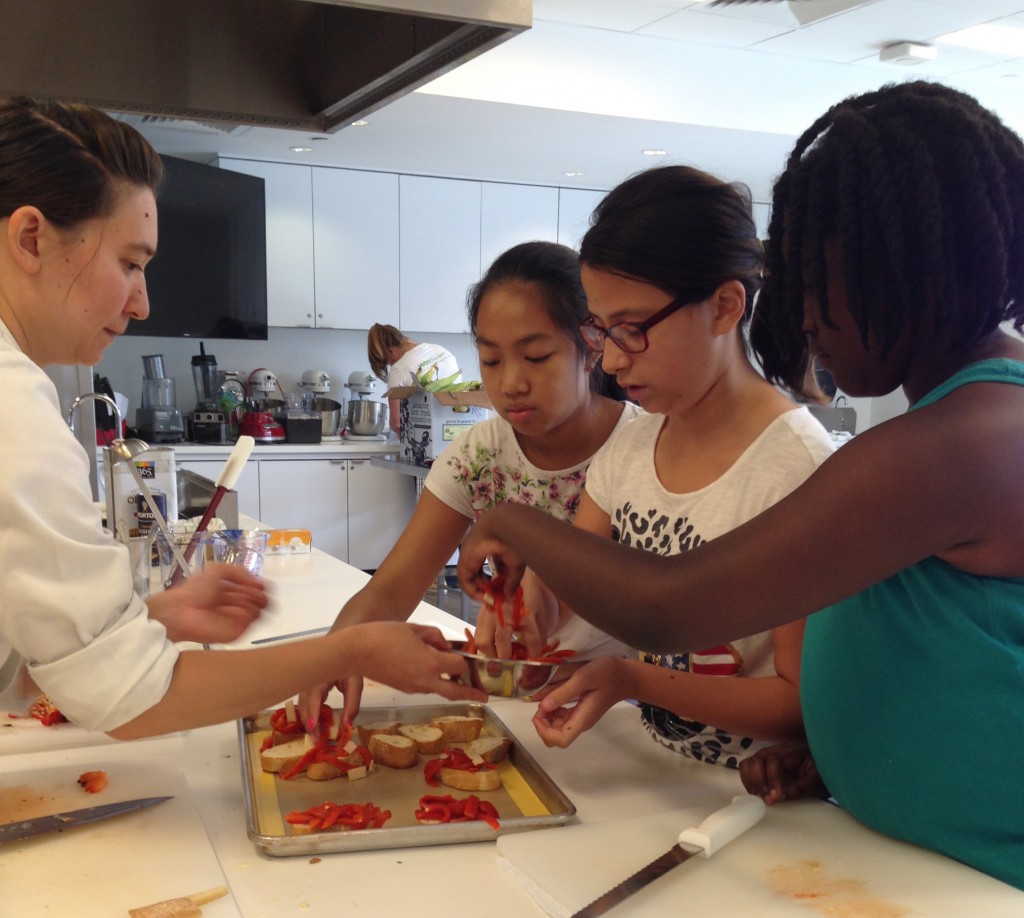 “We’re making something delicious out of garbage,” said VFFC Chef Sarah Cullen as she explained how to make a more flavorful soup stock by using the unwanted scraps from the vegetables that they chopped.

It was round two for the corn soup and “things on toast” recipes, and to keep it interesting, Cullen and Education Coordinator Maddy Booth decided to have roasted red peppers and parmesan cheese on the toasts instead of the salty broccoli, along with the usual caramelized onions and cheddar.

The group started out with the onions since they would need a lot of time to slowly cook down in the low-heated pan. They cut them, melted butter, and threw them in the pan. There was a little bit of crying from all the onion-chopping going on, but Cullen shared a trick that if one breathes heavily through the mouth, it will suck up the flying juice before it hits the eyeball and stings.

While the onions began to sizzle on the stove, the girls worked on everything that would go in the soup: corn, carrots, potatoes, celery, and garlic, putting all the scraps in the pot to for the stock. Once all that was in a pot on the stove, they noticed that the temperature of the onions had been up a little high, and some had burnt to the pan. However, Cullen explained that there’s a remedy for this called “deglazing” in which one adds a liquid — like water, oil or wine — to unstick everything and give it some more flavor.

The stock was then ready to be added to the vegetables in the pot. The recipe also called for adding cornmeal to the broth, which Cullen joked was to make it “cornier.” The little chefs thought that was very “punny”.

For some reason, the kitchen was freezing, so the kids asked if they could step outside to warm up. They all decided to take a short recess, and Cullen led them in some quick calisthenics to get the blood pumping. No one could help but laugh and join in.

Next, to cook the peppers, Cullen and Booth decided to stick them straight on the burner to get a nice roasting. They quickly blackened to the amazement of the young chefs. Olivia was on pepper watch, but she had a little trouble turning them over with the tongs because she was scared to burn herself. Once they were completely charred, they removed them, set them in a bowl, and covered them with saran wrap to let them steam.

This time, instead of baking the toasts, Cullen had a different idea to melt some butter in a pan and toast them like grilled cheese. This gave them a nice golden brown color, and a light layer of butter to make them more tasty and less dry. Then they cut up the pepper and cheese, finished off the onions, and topped the toasts.

When they were all sitting to eat, Booth and Cullen asked them to describe the food without saying something too general like “yucky” or “delicious” so they would learn to really taste the flavors in the food.

“The pepper is sweet but savory at the same time,” said Olivia.

Thankfully neither recipe came out as spicy as last time, so everyone really enjoyed the food. They eagerly grabbed their ingredients to go make some more at home.

We love seeing our students take the recipes and c

Building confidence in the kitchen is a key factor

Have you ever wondered what to do with those dente

Our #QuoteOfTheWeek comes with a few new lessons l

Repost from @hopeworkscamden • Check out the eff

#DidYouKnow that canned tomatoes are rich in nutri

Our #QuoteOfTheWeek comes with a whole lot of insp