Spicing It Up with Soup and Toasts | SummerThyme Cooks 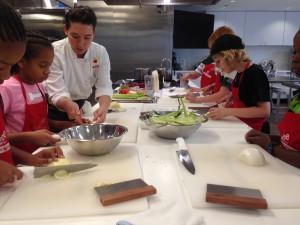 One of the main goals of SummerThyme Cooks is not only to show our young cooks how easy it is to cook at home by arming them with a few good recipes, but also to convey the importance of home cooking as a way to get and stay healthy.

This week the SummerThyme Cooks made corn soup and something Leanne Brown, author of “Good and Cheap” cookbook, calls “Things on Toast.” For this class, those “things” were salty broccoli and caramelized onions with cheese. But before starting the preparation, VFFC Chef Sarah Cullen talked through the recipes with the kids while explaining the health benefits of eating home-cooked food instead of eating out.

According to the Center for American Progress Action Fund, low-income areas often have scarce fresh options and are instead surrounded by fast-food restaurants offering processed foods at a relatively low cost. Working parents in these areas are faced with making a tough decision when it comes to meals and too often the cheaper, more convenient, but unhealthy, option wins out.

However, the Vetri Foundation for Children believes that with a little kitchen and shopping know-how, families are more likely to prepare their own food. In fact, all of the ingredients the kids were using for the soup and toasts cost just $3.75. They couldn’t believe how little fresh foods could cost!

As soon as Cullen told the kids it was time to gather around the counter to cut up all the vegetables, they were extremely excited to give chopping another try.

“Ooo can I cut them?!” they all asked as Cullen pulled out each vegetable they were going to use.

They chopped corn, onions, celery, potatoes, chili peppers and bell peppers for the soup, and broccoli, garlic, and more onion to top the toasts. All the scraps, like the skins of the onion and the core of the corn that one would normally discard, were thrown into a pot to make the stock for the soup. Cullen demonstrated that any food that is going to go bad soon or is not the part normally eaten can be reused in the recipe for flavor. Nothing would be wasted in Cullen’s kitchen!

After cutting the first batch of vegetables, when there was some downtime, the library’s Culinary Literacy Coordinator Liz Fitzgerald noticed that the kids were lacking some energy and had them all step back from the counter, and shake everything out to wake up. Some of them weren’t as into this silly game as others, but no one could resist cracking a smile and loosening up a bit. Her funny comments broke down that wall even further, and they couldn’t help but giggle.

“Don’t touch your eyes or pick your nose for like two days,” she warned after they had cut up some very hot chili peppers that would leave spicy oils on their fingers.

Once the broth had been simmering for a while, Cullen and Fitzgerald asked who wanted to try it to see how it was coming along. Mickayla shyly raised her hand first, and soon after, all the others followed suit. They seemed to be liking it so far.

Next it was time to start caramelizing the onions. Cullen explained that when you cook onions really slowly on a low temperature, they become sweeter as they cook. Also, she added some salt to draw the juices out and keep them from burning. She put Dwyer on onion stirring duty.

“The onions are turning brown!” he exclaimed after a few minutes of watching them.

Branch already knew what that meant.

Meanwhile, the other kids experimented with a different kind of knife — bread knives — which they used to cut baguettes into slices for the toast. They laid them neatly on trays and put them in the oven to be toasted.

When it was time to add the broth to the cooking vegetables to finish off the soup, the group discussed the difference between boiling and simmering — boiling is on a high temperature producing big, rolling bubbles, while simmering is on a low temperature with small bubbles. Cullen also pointed out that when one is making more than one dish, one must multi-task and start the things that take longer first so that it will all be ready at the same time.

They also learned an important lesson about cross-contamination. One of the kids could not have the anchovy paste in the broccoli recipe due to a fish allergy, so he had his own pan and spatula. Fitzgerald made sure that they all understood that his food must stay separate and cannot touch anything else.

“This spatula belongs only in this pan,” stressed Fitzgerald.

Once the toast toppings were complete, Cullen carefully laid them on the disks of toast while the kids set the table to eat.

They pushed two tables together to welcome some of the parents that came early. All of the cooks were excited to host the extra guests and were looking forward to sharing the food they made.

Everyone agreed that the soup and the salty broccoli were a little too spicy, but that didn’t stop anyone from gobbling it all up.

“This is my first time trying caramelized onions, but they’re good!” Jamaal said as he and his new friends delighted in the food they had created.