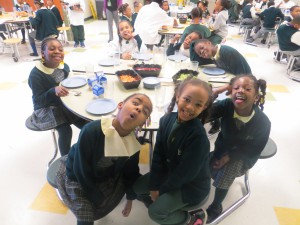 Last Thursday I was given the privilege of seeing the Vetri Foundation for Children’s very own Eatiquette program in action.

Arriving at the school by 9 a.m., preparation for the meal was already well on its way. What was on the menu for the day, you ask? A barbecue chicken sandwich, salad with homemade dressing, apple-carrot slaw, and fruit with a scoop of frozen yogurt to top the meal off.

Every day the chef announces the meal to the students before it’s served. Until I attended an Eatiquette lunch, I had never heard a group of kindergarteners cheering over a meal — a healthy one at that. They were more than ready to dig in.

“Why do you like the sandwich?” I asked a 6-year-old student named Destiny.
“Because it’s sweet,” she said.
“I like it too!” came from across the table.
“Same! It’s spicy!” from the other side.

Conversation was no stranger to these children. The kids were happy, they were smiling, and they were eager to tell me why they loved the food they were being served. And when asked why they loved it, it wasn’t just “because,” but rather an answer filled with adjectives to describe the taste, texture, and appearance. 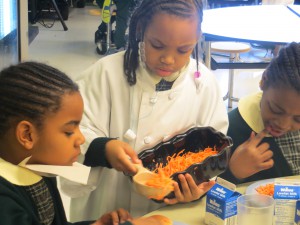 Every student, from what I observed, was willing to at least try all part of their meal — nothing like some of the picky 5, 6, and 7-year-olds I’ve known. Whether they were taking tiny bites of their sandwiches, carefully deciding whether they liked it or not, or devouring it quickly — the point was, they were trying healthy, delicious food that they may have never tried before.

For me, it was exciting to see these children so happy to eat a school lunch. You could sense their excitement as they waited for the chef to come out and the happiness they had as they heard what they were going to be served. You could see the positive interactions between the young children as they conversed with one another over their meal. In one lunch period, I saw the impact that this program has on the lives of the kids who participate in it. These students felt important. I didn’t just see a school lunch, but rather an interactive meal shared amongst friends.