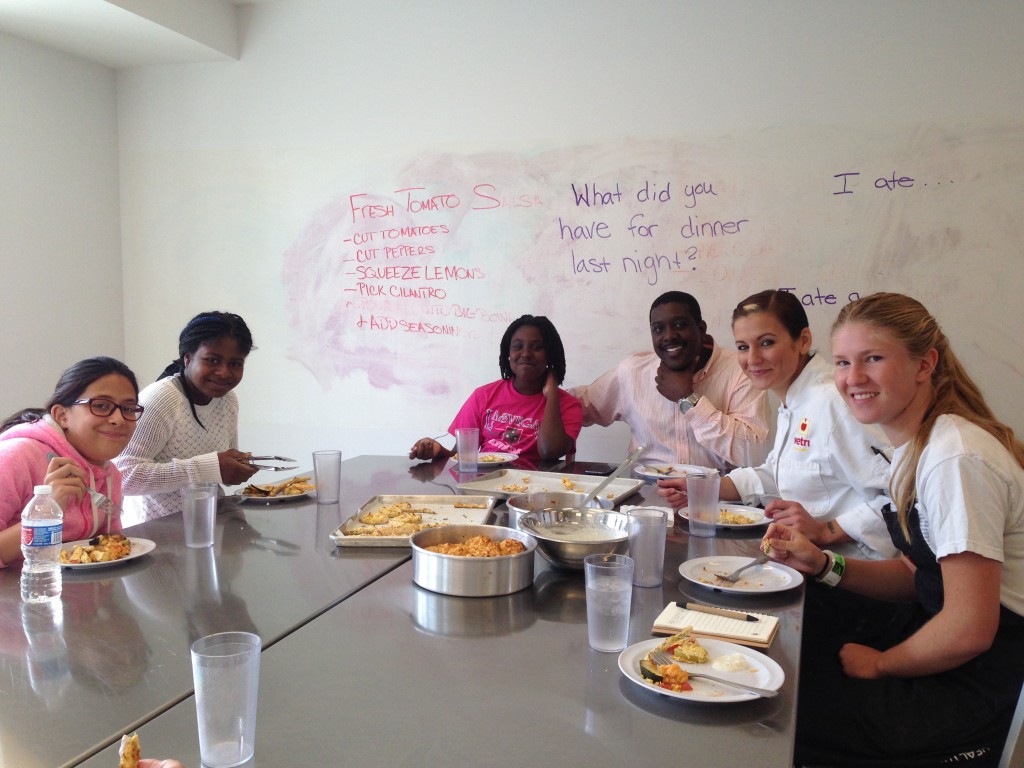 The SummerThyme Cooks got their fill of summer vegetables this week with savory summer cobbler and cornmeal crusted vegetables. They made the cobbler with tomatoes, summer squash, zucchini, eggplant and corn, and they crusted all the extras from those, plus green beans, green tomatoes, and red bell peppers.

Vetri Foundation Chef Carla Norelli explained  that while cobblers are typically sweet desserts, they were going to make one that is served as an appetizing main dish. She pointed out all the vegetables that they would be preparing, but admitted she had forgotten to buy garlic. In its place, they were going to use a shallot.

“Shallot is like if garlic and onion got married and had a baby,” she said to sum up exactly what flavors they would be adding to their dish.

The SummerThyme Cooks chopped everything up and put it in a big bowl, piling them up until it was almost overflowing.

It was clear they needed to make two cobblers, and they would still have enough vegetables to crust some too. As they were cutting scallions, Norelli encouraged them to try it.

“Like…raw?” Olivia asked skeptically. However, after popping a piece in her mouth she said, “Mmm like an onion, but you don’t feel the wrath of it.”

Once they seasoned the vegetables, they mixed them up with what Norelli calls her “two favorite kitchen tools” — their hands. Next, they put the vegetable mixture in pans to go in the oven and moved on to the topping for the cobbler, a biscuit-like bread. They ended up having tons of extra topping, so they balled it up like cookie dough and baked biscuits.

The summer cobbler, like many of the recipes used in SummerThyme Cooks, is just a baseline recipe. While it was finishing up in the oven, Norelli explained that next time they made the dish,  they could use whatever vegetables they happened to have on hand.

Their next job was to crust the other vegetables. They set up the crusting station with a bowl of flour, salt, pepper and paprika, a bowl of egg, and a bowl of cornmeal seasoned with garlic and onion powders, salt and pepper. The inventive girls set up an assembly line with Imari coating the vegetables with the flour, Olivia dipping them in the egg, and Landry caking them with the cornmeal and laying them on baking trays. Those went in the oven along with the cobblers.

Norelli decided to make one last thing to compliment the crusted vegetables: a dip. She explained that when you have a lot of smoky, roasted flavors, it’s good to make something “cool” to echo the deep flavors. She showed them how to make a dip with buttermilk, greek yogurt, lemon juice, and grated cucumber, which provoked a discussion about what makes greek yogurt different than regular.

Finally, the dip and the dishes were ready, and the light lunch was served.

It sure was a colorful, summery treat!

Savory Summer Cobbler(Scroll to the bottom)

Thank you to the @zekauskasfamily for their contin

What a night! On behalf of everyone here at Vetr

Happy Monday! It’s a brand new week, and we wa