“Hey, Let’s Do Something Good” 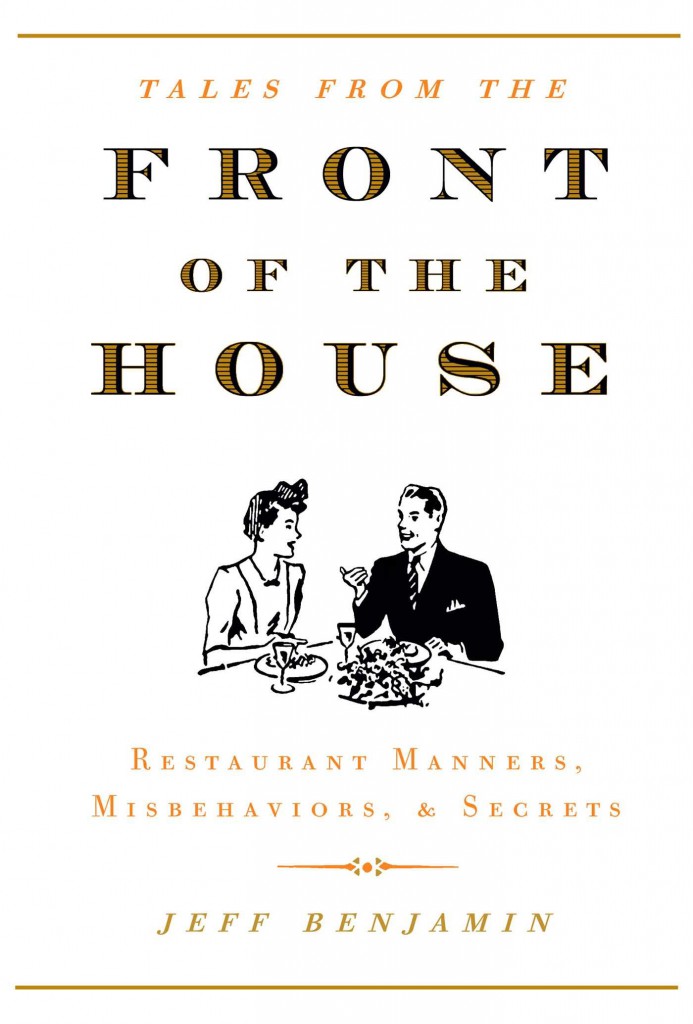 An Excerpt from co-founder Jeff Benjamin’s new book Front of the House: Restaurant Manners, Misbehaviors & Secrets out on Tuesday, March 17 on Amazon. Publisher Burgess Lea Press donates 100 percent of after-tax publishing profits from Front of the House to the Vetri Foundation for Children and Drexel University School of Culinary Arts.

Whenever I meet people who are curious about the restaurant business, they ask how I handle the long, hard hours. I counter with the old adage, “Find a job you love and you’ll never have to work a day in your life.”

Regardless of their profession, I don’t know any successful people who aren’t “always working.” I love the hospitality industry and have since the day I first punched the time clock at a catering company when I was a teenager. If I had found another calling in life, I would have worked just as hard to be successful.

But no job is as hard as being a father. Nothing is as important as consistently setting a good example for my children. I believe that they understand a healthy work ethic and hope that we show that to them daily. But sometimes I wonder if they really get it, and I wonder how a conversation might go if the topic were raised at the dinner table.

“I’d ask if you tried as hard as you could and gave it your best effort.”

“Then I would be proud of you for trying so hard, and I would help you set goals to do better next time.”

“So I wouldn’t get in trouble?”

“Of course not. There are two instances where you can get in trouble with me for school performance. One is if you don’t do your best; and you just said you did your best, so you’re safe there.”

“If you stop being nice to others. I can stand just about anything, but if the principal called to tell me my daughter wasn’t a good person, that would probably be the worst thing I could think of.”

I have the same theory with my extended family—the Vetri Family—and I look at the whole group as my kids, in a sense. How do you get kids to act in a manner you would choose for them? Set an example.

Very early in our partnership, Marc and I made a commitment to each other that if we were to become profitable, we would also become philanthropic. We are, after all, in the service industry, and if we had the means, we should serve the community at large as well as the guests in our dining room. At first, we figured that we would simply give to charity in the form of distributing restaurant gift cards to be used in auctions that raise money for good causes, picking the nonprofit organizations that did work that was close to our hearts.

Soon after we opened, we realized we had reached a position that would allow us to start the process, and we started offering gift cards for auctions as planned. But soon, a member of  one of the organizations  we partnered  with said, “Of course I’d like you to donate to our charity, but I’m happy to hear when someone does something beyond donations—anything, really—to further the cause.”

So in 2004, I cold-called the director of a foundation called Alex’s Lemonade Stand. Founded in 2000 by a four-year-old cancer patient named Alex Scott, it was already having an impact on funding research into pediatric cancer cures. Unfortunately, Alex passed away in 2004 at the age of eight. Her parents continued her work and have established a world-class foundation that has generated over $80 million, relying heavily on people who erect makeshift lemonade stands and donate their proceeds. Just before making the call, I had participated in a charity event that, among others, brought together several accomplished chefs to donate their services, feeding all involved with fantastic foods. Brilliant!

During my call with the founder’s mom, Liz Scott, I asked for a meeting and she agreed. I pitched her on the idea of reaching out to my colleagues in the hospitality industry and asking if they would do an event similar to the one I’d recently attended, but for Alex’s Lemonade Stand. I conceded that she didn’t know me or our abilities in the charity realm, so I asked if she would allow me to hold a couple of small events and show her what we were capable of. She agreed, and we got to work.

As it was January, the month Alex was born, we decided to hold a birthday celebration in her honor, and we raised $2,000 that night. We followed that up with a larger event that brought together five of our local colleagues in the Philadelphia restaurant scene, and that effort brought in close to $30,000. We decided to kick it up a notch, and invited chefs from around the country, so that in addition to raising a lot more money, we would increase awareness. We had just opened Osteria and were happy to offer that space free of charge; all the chefs we contacted were excited to get involved and everyone’s participation helped us reach by far our highest total at that time, nearly $250,000.

The following year, in typical Philly style, it was go big or go home. We got the city to close Broad Street—the biggest street in Center City—right in front of the restaurant.  We doubled chef participation as well as revenue. By now, we were fairly confident that we had credibility with Liz and her organization. When we informed her of  our increasing revenue projections, she expressed concern that  if  we turned  over operations to the Foundation,  it might  be too risky for them to lay out so much up-front money without any guarantee of return—she explained that it’s hard for a nonprofit to spend money in order to make money, and we understood. So I asked her what would happen if I spent all the money and simply cut them a check from the proceeds. Her concern with that option was that if people wrote their checks to us, the Foundation wouldn’t get the tax break associated with the donation. So… how could we combat that?

In 2008, we established our own 501(c) 3 organization, the Vetri Foundation for Children.  Originally we assumed this foundation would simply subsidize the philanthropic habit we had developed. But it has grown so much since then.

Anyone who has started a nonprofit knows there’s a lot more to it than simply saying, “Hey, let’s do some good.” As we quickly learned, in addition to the forms and regulations necessary to register as such, we needed to form a board of directors. Taking our social responsibility seriously, we sought out the people we thought could best give us direction. At the very first meeting, this group of nine business leaders from Philadelphia posed a simple question: “We admire the work you’re doing around pediatric cancer research, but why aren’t you focusing on an issue where you can make a change for the better in an area you know intimately?”

“What issue is that?” we asked.

“The global crises of obesity and food insecurity.”

That did it. We do know food, and we’d figured out how to market it for a profit; perhaps we could use that knowledge to help provide nourishment to people in underserved communities. That initial  conversation  led to  the  Vetri  Foundation  program  called Eatiquette,  which makes the  connection  between  healthy  eating and healthy living. It continues to grow, enabling local schools to provide nourishing food that is locally sourced, freshly prepared and completely paid for by us. It encourages family participation and stable social environment.  We aren’t reinventing the wheel, only trying to reintroduce it. This is the way families have eaten for generations, and we want to help make that connection again.

Hunger affect us as a society, regardless of social class or geographic location. One out of every three children risks developing type 2 diabetes, and sadly, the current generation of kids is the first that risks not outliving their parents. From an economic standpoint, this global health issue will affect all industries’ ability to hire and retain quality employees, and it will drain our national healthcare costs. Not to mention that it is inhumane to sit idle while our neighbors suffer.

Why does this make a difference to an independent restaurateur? In addition to the good reasons outlined above, the main reason we do what we do is much larger than being a successful businesspeople. I’m a citizen of the world, and even more importantly, I am a parent. I want to see my kids flourish in an environment that is vibrant and full of opportunity.  What we do, how we make a living, that will likely end with us. However, the way we live will continue long after we are gone.

So I encourage you to get involved, do something, do anything to make tomorrow brighter for everybody.

Front of the House: Restaurant Manners, Misbehaviors & Secrets hits bookstore shelves on March 17, 2015. Preorders are available at Amazon. Publisher Burgess Lea Press donates 100 percent of after-tax publishing profits from Front of the House to the Vetri Foundation for Children and Drexel University School of Culinary Arts.